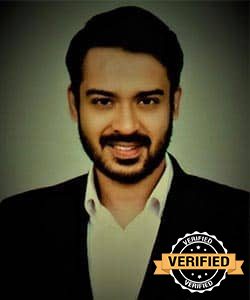 An enigmatic public speaker, writer, actor, a theoretician, analyst and philosopher – exposed to myriad interests, Mr. Bhandari pens on varied subjects ranging from law, philosophy, social structures, politics, economics, and literature. With a deep insight of Criminal, Matrimonial and Constitutional Law, Mr. Bhandari mentors law students and interns to help them develop an appreciation of the subjects. A practicing Advocate in Criminal, Matrimonial and Constitutional matters Mr. Bhandari takes up matters before the High Court of Punjab and Haryana, and districts and sessions courts of Chandigarh, Panchkula, and Mohali. Mr. Bhandari is registered as an advocate with the Bar Council of India and is a member of Punjab & Haryana Bar Association.

Ambransh sir and his team of the associate is very good, our property court case is being handled by his law firm. We like that there is proper communication and he never refuses for any revision or anything that need to be discussed. He is always easily available to his clients.

We are highly indebted towards efforts led by Mr. Bhandari to our favour. He is an incredible advocate in matrimonial matters and has an extremely sharp mind.

Never thought I’d come across such a prudent advocate in India. I can describe Mr. Bhandari in three words – honest, humble and Hardworking.

Thoroughly impressed by Ambransh ji for his clear attitude towards life and practice and it is brilliant to see how systematically his office works. The most impressing part is his time management and how he handles his legal matter. He does not waste time and is as dedicated as one can be.

Genuine advice is hard to find and I think someone looking for genuine advice, must definitely consider consulting Mr. Bhandari at least once before filing a case. In my experience after running around from office to office for two days, he is the only advocate whose consultation was totally worth and who told me everything about my case, in fact, he told me not to pursue it. Rest all lawyers were just trying to make a case and rip me off.

Simple and honest advocate. Handled our property matter very well and we got the stay in time.

Mr. Ambransh is a gem of an Advocate. Not only do I consider him as the best advocate in Chandigarh but also as a very good human being. The kind of help that he gave me and my family is brilliant.

No ordinary advocate can actually manage as much work with as good care and concern towards every case as is the case with Ambransh ji. I have seen him work from early morning till the middle of the night. Hats of the spirit. It is commendable that he has implemented such good professional systems in his law firm that makes it easy for his clients as well as the staff. He is a really wise and progressive manager. All the very best.